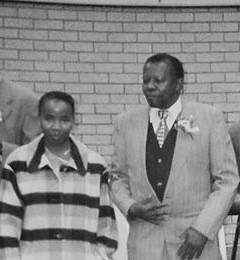 This is a picture of a girl taken on the day in which she won national essay competition.

She didn’t think she would win. The guidelines of the competition indicated that the essay must be type-written.

The girl had no access to a computer but a deadline was approaching.

So with a black pen she poured her thoughts on a piece of paper.

She did not have a stapler but she held the pages together with a thread and went to the post office, send through her entry with no hope to win but with contentment that she tried.

She didn’t know the decision would be a road to one of the best moments in her life.

By God’s grace she qualified.

She became the second best in the senior secondary school category.

Along with other winners, she got congratulatory message from the then president Sir Ketumile Masire.

The president, with explosive energy in his voice, told the winners that their written words were of great importance, that their words would shape the future of the country and go on to become part of the pillars of vision 2016.

The president told the winners that in the years to come, every time they hear the phrase “Botswana Vision 2016” they should take pride that they were part of the formation of this vision.

On that day the girl on the picture got more than a handshake, she got a message to run with for the rest of her life.

She got the message about the power of words.

She learned that her words are powerful messengers that could be send into the future.

She learned her words could shape policies and shape the vision of the country.

She learned that words could change lives.

She learned there is nothing insignificant about the words she writes.

She learned the words she writes belonged outside her dairies and journals, she learned her words belong to the world.

This was moment was a right of passage of sorts for a young writer, a rubber stamp of sorts about her abilities to write.

It was a conversation of her capabilities and since then that conversation never stopped ringing in her heart and in her mind.

That girl still believes in the power of words.

Now that girl runs a blog, she co-authored a best-selling book, she guest blogs, she continues to write.

And that’s what happens when a young girl is given an opportunity to meet the president.

That’s what happens when the president tells a young girl that there is nothing insignificant about her words. 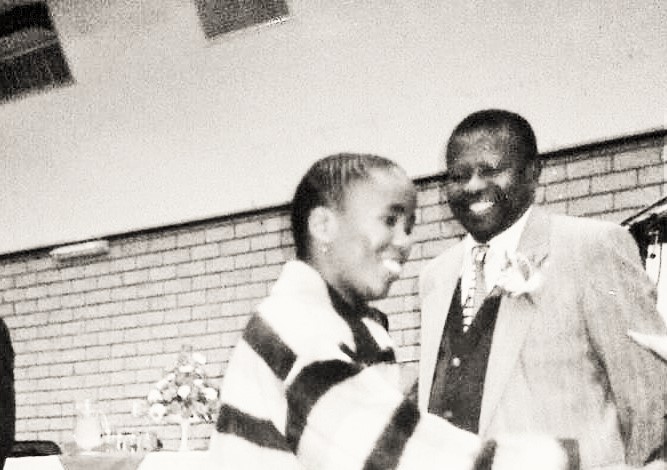 I am that girl in the fading picture about 20 years ago next to the former president Sir Ketumile Masire.

In that moment I started owning my writing superpowers.

I tasted victory that fueled my passion for writing.

I drunk that moment and my deep love for words that was long cultivated by my mother grew to another level.

Early in my life I learned I’ve got it.

Even years when I did not produce anything for public reading because of other demands I still knew I’ve got it.

The truth is there is a chance that I may never have believed my capabilities if I didn’t get the exposure I had early in my life.

It is also true that in a single moment a child’s faith in themselves can change. An encounter with a hero; a word from  a hero can shape the destiny of a child forever and can make the child bid good bye to average dreams forever.

As the former president of Botswana; Sir Ketumile Masire was laid to rest today and our hearts still bleed over our loss, personally I take away with me that old conversation that my words have power.

So I won’t stop writing, I wont stop releasing my work into the world. I will keep writing and hold the hope that the words I write will count to something.

I wont stop writing because I learned that words sometimes are the best gift one can give other humans.

I pray that more local writers may continue to send their words into the future, may rise and write fiercely and boldly, so that in the end the lives we lead are not quantified in small measures.

Sir Ketumile Masire your memories will live forever in our hearts, and we will be remembering your words for a very long time.